Romania is the country which is situated in the Southern-Eastern part of Europe. Its population is about 19 millions of people. More than 2,1 million people live in its capital - Bucharest. Population rate of Romanian other cities is shown in the diagram below. 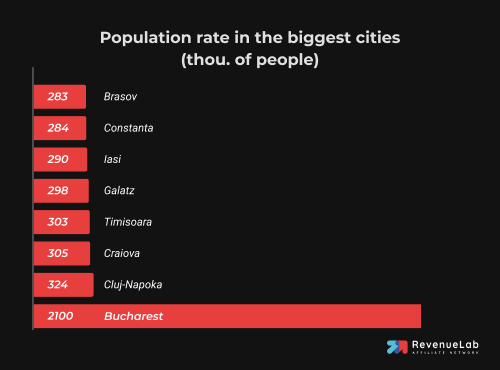 By the way, the population concentration in Romania is pretty similar to the Russian’s one. It means that there is a capital where all people move to and other small towns where the population is 7-8 times lower than in the capital. Every year more and more people from small towns move to Bucharest so many localities can become uninhabited in the near future.


According to the latest report, more than 80% (15 million) of Romanian residents are regular Internet users. This proves that the country is not lagging behind the most technologically advanced countries in the world.


Another interesting fact about Romania, which does not often appear in our media landscape: in Romania there is almost the fastest Internet in the world (15.27 Mbit/s). The faster one is only in South Korea (17.62 Mbit/s).


So where there is a seamless Internet, there will always be online games, including gambling.


Romania has a long history of legalizing gambling. The first national lottery, the Lottery Romana, dates back to 1906. During the reign of Nicolas Ceaușescu, gambling was forbidden. However, in 1990, after the overthrow of his authority, the gambling business was legalized again.


In the last decade, Romania has established itself as an excellent GEO for gambling. A combination of factors contributed to this at once: political stability, a progressive legislative system, established telecommunications links and the country’s developed financial sector.


At present, gambling in Romania is closely linked to the country’s tourism industry, which, according to the latest data, generates 5% of the country’s GDP. Extreme amendments to the main legislation governing the entire hambling industry were introduced in 2015 to highlight the position that all international operators should henceforth be licensed by the National Gambling Authority.


For a moment, let’s go back to the population of this beautiful country. Half of Romania’s population is between the ages of 18 and 50. Research shows that this is the target audience of online casinos and bookies on demographic segmentation. 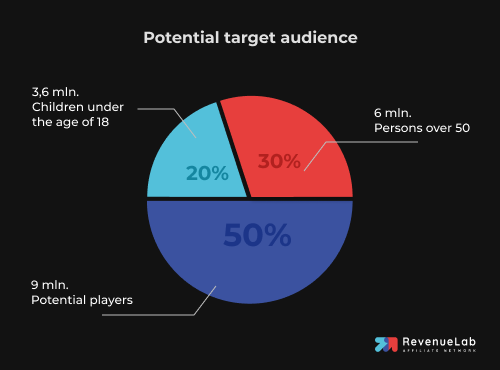 Nine million potential players. This is an impressive audience. However, this GEO hasn’t been even touched yet. Remember Australia, which until recently was at its peak, but now is getting worse by the day.


Hence there is the large annual gross cash turnover: The rate of growth is rapidly increasing. This is particularly evident in the volume of cash circulation between 2018 and 2019. We can expect the year 2020 to surprise us just as much. The pandemic, which has closed all homes, is likely to have further increased the involvement of players and as a consequence - the amount of money in circulation.


In fact, this can be seen in the following diagram: 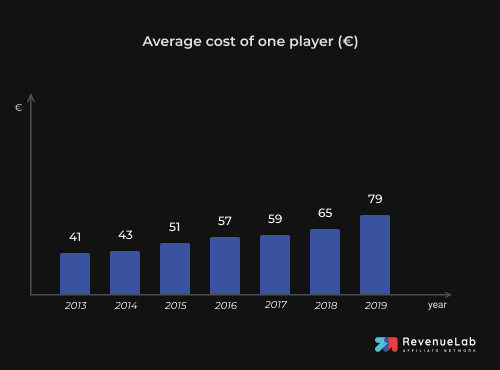 During the 6 years of development of the gambling sector in Romania, the average gambling expenses of players doubled. Every year, players are ready to leave more and more money in land-based casinos and online platforms.


The tax system for online gaming operators is structured as follows: operators providing their services online must pay an annual authorisation tax of 16% of the gross gain in addition to the 2% turnover tax. 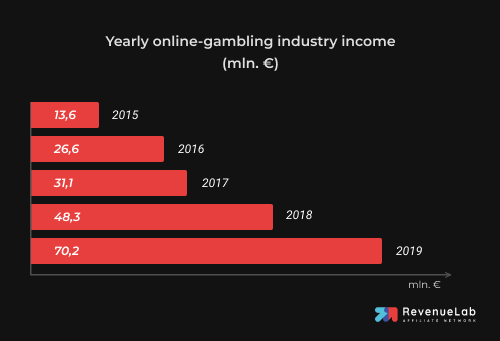 Accordingly, for example, in 2019, the government received an authorization tax of €11.2 million from the online gambling industry.


The iGaming market in the country has matured quite recently, but is gaining momentum. By the end of 2019, the share of iGaming niche in Romania was already 15% of the total gambling market of the country. 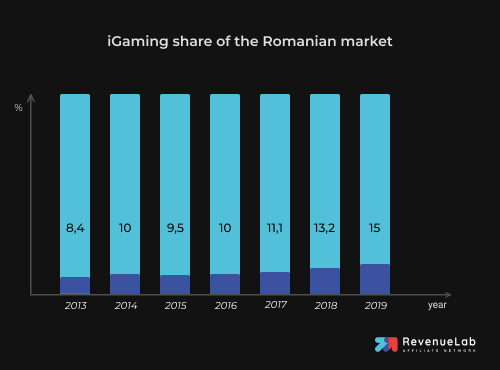 Specialists are confident that the pandemic will significantly influence the trend of increasing demand for online gambling, and by the end of 2021 the iGaming niche will occupy already ⅕ of the whole market. Some predict even ¼.


Regarding the gambling regulatory policy of the country, the state regulator does indeed work, occasionally adding illegal operators to the blacklist, proposing legislation, and even providing recommendations.


For example, in March 2018, the Romanian Regulatory Authority presented the "Code of Ethics for Gambling Advertising" to further protect children and vulnerable consumers. The Code is not a legislative act and includes recommendations on marketing, responsible play, protection of minors, health and education. And more recently, in August of this year, ONJN has contributed 20 illegal gembling operators to its blacklist.


In fact, such blockages are extremely rare, and if you compare the ratio of blocked websites and domains in Romania with any currently popular GEO, for example, Australia - it turns out that there have been blocked about 180 gambling operators in the last year in Australia and another 100 brands were forced to leave the market under a threat of permanent blocking on the territory of the country. Meanwhile in Romania there have been only 20 operators in the blacklist.


The shadow segment of the market in this country is not subject to as severe repression by the authorities. Therefore, the offshore that we all love so much can function normally.


By the way, we have excellent CPA offerings for Romania, which we are happy to share with you!