TopDuke is a private cost-per-action based affiliate network by affiliates for affiliates. We are committed to build sustainable relationship with the affiliates. We provide our affiliates with the exclusive top paying offers mostly not seen on anyone else. To ensure our offers to be always highly convertible, we are strict with affiliate applications but everyone has a huge chance on getting accepted. With our best kept promise that we will accommodate timely and flexible commissions. We also do not tolerate fraud but give out exclusive rewards to our top earners. Because we are a private network, you are always sure you will get your earnings. Sign up as an Affiliate today and we guarantee that you will get what you earn!

i can see many affiliates and Advertisers complaining that TopDuke is great Scam.. Are you stupid enough to trust this shit after reading my reviews on here.. Can,t read my all reviews and RV stupid reply??..stop commenting more.. Just remove this shit from this forum

scammed for $2k
the guys were on Vegas summit, they seemed reliable at personal contact, but appeared to be a total scam
who had a success story with getting the money back? please share how you did it as they do not seem to be alive anymore

same as the guy below me. I signed up as an advertiser as well and prepaid $1000 so that he could pay affiliates. The only traffic I got was because of one publisher I referred over to the network to run my offer. He ran up over $1000 in cost to me, yet. He was never paid either by RV Vallo, the owner of Topduke. This guy is just a scammer and nothing more. He also deleted me off of skype or either closed his account and had stopped showing up on aol as well. twice now when you go to his site it just redirects to hasoffers, so he isnt even paying for his hasoffers service. DONT MESS WITH THIS COMPANY, AND IF ANYONE WANTS TO COME TOGETHER TO TAKE HIM DOWN, LET ME KNOW. I have his name, bank info, etc.

Hello, I am an advertiser with TopDuke. That is to say, I signed up to be an advertiser with TopDuke and then sent him $1,500 to pay publishers for traffic they send to my offer. However, to date, I have not one conversion to my offer program and RV Vallo won’t even answer any of my email requests. It is now going on 3 months since I sent him the funds to pay affilates, but no affilates are being paid since I am not getting the conversions he promised me before I signed up to be an advertiser. Any clicks I did get to my program resulted in fake 404 Error Page Not Found traffic which never even made it to my conversion landing page. He still will not reply to any of my emails. I have kindly asked him to refund my deposit if he will not fulfill his promise of leads to my offer and program, but he still will not reply. I cannot tell you now how many emails I have sent to him for assistance with not even an auto-reply. It is unconscionable and monstrous to take someone’s money and then not even have the decency to reply to their emails for help in fixing their program. Run from this CPA network. He may even be running a Ponzi scheme by taking advertiser funds and then only paying some of those funds to affilates, while keeping the balance, even though traffic affiliates send may be indeed be valid. He is very shady, and I am sorry for making the dumb mistake of sending him funds without knowing more about his company. Just stay away from him and do not make the same mistake I did by sending funds to be an advertiser. I will keep you updated if anything changes with my program or if he emails me at all. Just for clarification, I am and "advertiser" and not a "publisher" with his company.

I received my $754 yesterday and it was fast. Thank you Topduke for such a great business. I will definitely be rich!

No reply after 2nd july.. when there is time to pay RV don,t need to reply? lol.

Been with this network for 4 months now and the timing of their payments are great! sometimes, rv even pays me my commission beforehand. Everything is just so great. I prefer topduke than cpatank nor ewa.

Topscam Network.. yesterday i emailed RV to pay my march payout he blocked my account without any notice.. I just signed up and send him little traffic.. i was suppose to be paid of my march Commission. I know this Scam RV will never reply or will just say i did fraud lol. here i attached my March payout invoice.... Contact me back TOP Scam Duke .. RV

Anyone got payment or even response from RV???... Bad Experience..

i just join this network its very good network have lots of offers .
i planed to work for long time with them.
topduke is best network to work with.

I am very happy for you on impact and I wish success to all and we have to work hard to keep our network is always better
http://www.topduke.com/
You are the best and special thanks to Mr.RV Vallo

Just got my payment. My earnings were actually just $524. But RV insisted to close it at 550. What a nice guy. Thanks TopDuke! I'm glad to be a duke! 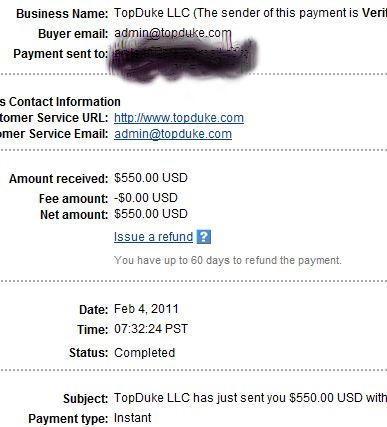 To all guys, You should watch out for this scam network!

I heard them on digitalpoint at first, they claimed that they pay biweekly which seemed

attractive to me. I signed up and got approved, promoted his a few edu offers for over

$500, the owner reached me claiming that his advertiser complained about my traffic that

were blank referral, it looked suspicious and they refused to pay me. They could provide me

a detailed report on my leads/traffic, they just refused to pay!

Here the interesting story came. The owner reached me with his proposal. He said he

trusted me that all my leads were legit, but he could not pay me coz advertiser did not pay

him. He wanted me to continue promoting his offers and he would add 50% of my total

commissions as compensation. He also moved me to weekly in order to gain my trust.

I was so stupid enough to trust this fxxxxx again, I sent him traffic again, made about

$130, was supposed to be paid this monday, this scammer claimed he got another compliant

from advertiser. No more info was given, my account was banned. I tried to email him a few

times, he ignored all of them. I used a new AIM handle to contact him, he blocked me

immediately after I told him my name.

I know my leads/traffic are legit coz I'm sending the same to 3 other major networks, all

paid without any problems. This is the only network that gives me shit fucking reason to

The owner is from PH, he can not even speak english well, runs his scam network brokering

most of his offers from yeahcpa.com(which is now a "well-known" network). This is the worse

experience I have ever had with a network. You guys should be aware of this son of a bitch.

I got a week vacation and I checked my PayPal account for payments, topduke has the highest of them all. I can't believe a network this small can be so big. 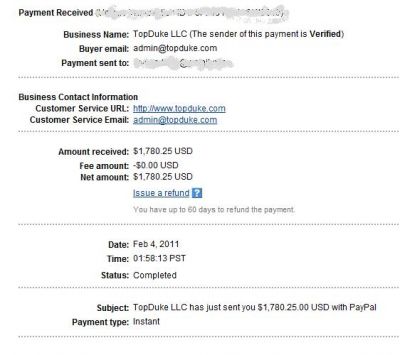 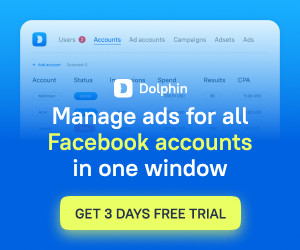