lovely network ,I have been working with this network for almost two years now it is trusted and pays fast

I love TPMN, It's very Cool

Quick payments, new offers daily. When i'm looking for a specific offer they find it for me. We've worked together 5 years now.

Very friendly and helpful when I signed up. Helped me get used to everflow since it was a little different than hasoffers. I just received my second payment and love the low paypal minimum.

nice network, fast payments. i just wish it was weekly net3, instead of weekly net 12. but weekly is still nice.

sweet offers and system, a little slow on support.

Good network. We've read the reviews and all i can say is we get paid every week, without delay. we've sent solid traffic and have never heard a complaint from the network. But then, we've never violated their rules.

TPMN aka Nutracash aka Shaw Enterprises is refusing to pay us $3,114.00 because they claim we were running an offer non-compliantly (we did 3 conversions, $270 on that particular offer).

We have been running some traffic with them since Oct 2020. Payments were never made on time and always required me nagging them via email or skype to get paid. This should have been a red flag but we kept running as they had a few offers we couldn't find elsewhere.

I contacted them about payment again in July as they were behind several months in paying us. Was told it was a payment threshold issue (3k threshold) and asked for it to be lowered to 1k. Was told this would be changed the next day. Never received another payment from them.

We received an email on Aug 18 that an offer we were running had changed their terms and no longer allowed brand bidding. We paused the campaign and replied to the email. We received another email on Sept 2 saying they had seen the offer running non-compliantly again and were banning our account for TOS violations.

We had run $270 worth of traffic (3 conversions) to the offer in question. We never received the payment we were told was coming in July, so they basically stiffed us for several months worth of traffic.

They have not responded to emails or Skype messages since. I sent a demand letter to Jason Shaw with no response.

Solid network. We had an issue with my back account after the wire had already sent. It was no issue, they resent the money to me in BTC with no delay.

1500+ offers and more every day. I never run out of stuff to promote.
Solid people who pay with btc!!! 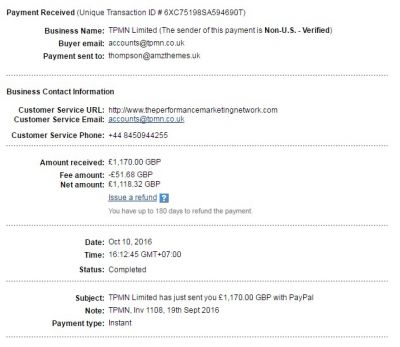 Subscribe to Our Newsletter
Copyright © 2010-2023 Affpaying.com All rights reserved.