eAdnetwork is the perfect solution for online publishers whether you are an Email marketer or an Social media marketer we have the perfect solution. We work with the industry's top advertisers and pulling up the Top offers with Highest Payout possible. If you are tired of running offers that just don't convert? and we understand you need more. Instead, we promote only top performing offers, and because the majority of the offers we promote are exclusive, and we also assure you the top possible payouts. Our Marketing Analysts keep constantly evaluating the eCPM and eCPC of the offers in our system, and keep you sending the best source to multiply your revenues. eAdnetwork will never assign you any Manager. Instead you will assign with your personal coach to help you scale your campaign and divert you on the correct path of line of making more revenues.

this guys are silent killers they sent me my commission way too early then i expected posting my proof aswell !!!.. EadNetwork guys are excellent group of team and its always pleasure working with them.... eadnetwork is a kickass network and they never failed me. here is my Latest payment proof. i got a while ago

p.s: do not believe in these fake negative comments I recommend eadnetwork at fully extend they are real helpers and make sure you make money like no other network does. 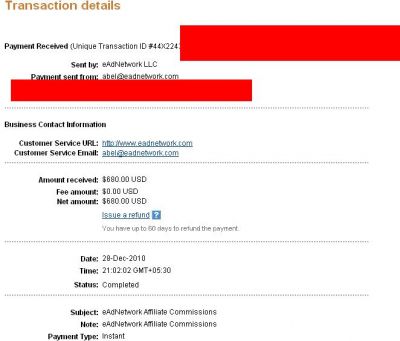 eadnetwork nice network :) i start only this month my am helping me too very recommended !! I love eadnetwork :x

eadnetwork is a KickAss i dont know whats up with the negatives reviews below but for me they are the best network to promote offers from the selection of every offer they have is outstanding. 5/5 stars to eadnetwork 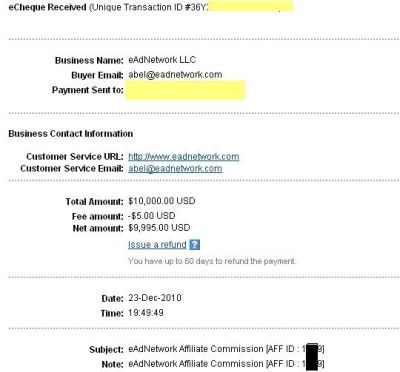 i have been working with eadnetwork fr 4 months now and never had any payments issues eadnetwork always pays before the payment date and attached is my latest payment proof i received today i am getting paid every week from them with no problem at all.

Last word. eAdnetwork is the best CPA network i have work so close with

KickAss Network getting 100% of leads so far they have lots of incentive offers that i am promoting and the tracking rocks non of leads have been shaved yet and i am too excited will post my payment soon.

In my opinion eadnetwork is one of the most educated network out here my am abel really knows how the business goes and he knows well all the ups and down for me he has been a great support i just started pushing traffic to them i will update and post my screenshot when i get my first weekly payment which i am set on default.

Don't even know where to start except to anyone reading this, please AVOID this network.

First off, they said my check was in the mail October 2nd for commissions earned in September due to the payment being over $1,000. The check never showed.

Abel BLOCKED me on AIM after I repeatedly ask why the check has not shown. I called him out on this after signing on a different screenname - said it was an "accident".

Told me to contact payments department - who after ignoring 4 of my emails, finally replied saying I will be paid a month later (even though they never sent the check). I was somewhat patient and waited even though it was now an entire month late.

They said I would receive a wire on November 15th for commissions earned (IN SEPTEMBER!). November 15th comes around, of course nothing comes in.

After many ignored messages and e-mails (and don't bother with the phone number - it just goes to a voicemail), apparently my check "was never sent", and now the "advertiser is not paying out". So let me get this straight - because you decided to pay me 2 months late, now you won't pay?

I sent to 5 different offers. The reason the advertiser was supposedly not paying is due to "bad traffic quality". This was on ONE of the offers. The advertiser also "owned another offer" (completely unrelated offer by the way) which they "decided" not to pay.

I asked to get a copy of the e-mail from them stating this, which they said would be sent. Still have not gotten this sent to me, and I doubt it exists. I was supposed to be paid out for the other 3 offers 3 or 4 days ago. I have sent emails and messages again, which are being ignored.

I have completely given up on receiving a single dollar from this network. A complete scam - I'm glad I didn't send more traffic.

got my payment of $133.1 yesterday not bad support is really fantastic but at some times they are not available busy may be but some new guys are helping me out nicely

Any one got payment from them .

This CPA network surpasses my all existing ones with high payouts and great support Generously helping me out on making money and guiding me to the right direction with personal efforts eAdnetwork is totally charismatic network/. Its your lost if you are not with eAdnetwork